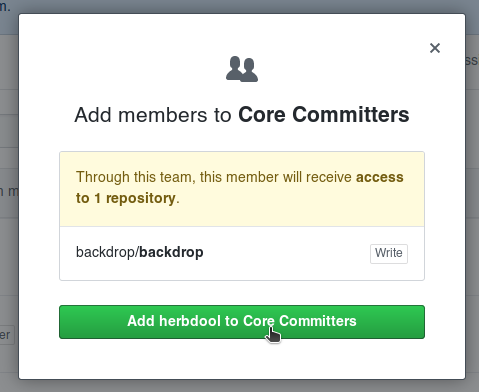 We're excited to have Herb v/d Dool (also known as simply @herbdool on GitHub) join the Backdrop CMS Core Committers team! During the tremendous effort put in by Herb during the Backdrop 1.11.0 release (and before), I noticed again and again how Herb was providing thoughtful, helpful feedback in the Backdrop issue queue. I took the suggestion to make him a core committer to the Backdrop PMC, who approved my suggestion unanimously.

We've updated the Project Leadership page to include Herb as a core committer, and he's been given the needed permission on GitHub. From the leadership page, here's a brief summary on what this means:

Core committers are responsible for the day-to-day business of reviewing and committing code to the core Backdrop repository. Core committers are enabled to use their discretion when merging pull requests that are in line with the goals of the project.

You may have seen Herb when he's taken the lead, such as translating Taxonomy terms, but he's more likely to be found finishing issues rather than starting them. For example he carried the torch to completion on adding page-less nodes to core (one of the oldest and longest running issues in the issue queue) in 1.11 and he's working to wrap up adding Options Element to the Form API for 1.12. We've frequently seen Herb wade into a complete quagmire where no solution seems possible and come up with a simple and satisfying answer.

More than anything else though, Backdrop community members are likely to see Herb in their issues reviewing their pull requests. Looking back, he's participated in nearly a hundred reviews! We're lucky to have such a prolific reviewer in our community, and now I hope that Herb can help empower more contributors by helping them through the review and committing bottleneck.

Thanks so much Herb!