With the recent release of Backdrop 1.4, I wanted to take the opportunity to see how we are doing on our efforts to keep Backdrop running fast. Backdrop's mission is to make site ownership more affordable, and fast performance is a big part of that.

Backdrop is fully compatible with PHP 7, and we run every commit and pull request against both PHP 5.3 and PHP 7.0. From that experience, we already know that PHP 7 is a good way to get a faster Backdrop site.

Though we have a rough idea from repeated test runs clocking in lower on PHP 7, exactly how much faster is Backdrop when running PHP 7? And how about Backdrop when compared with Drupal 7? Let's do some benchmarks!

I modeled my tests off of the excellent work done by Jeff Geerling in his post Benchmarking PHP 7 vs HHVM - Drupal and Wordpress. I used his most excellent Drupal VM project on GitHub to set up environments for each PHP version. I've attached the Vagrant config.yml files I used to create the sandboxes. Drupal VM 2.4.0 uses the following:

Incidentally had absolutely no problem running Backdrop CMS in Drupal VM. Just drop it in and it worked side-by-side the Drupal installation.

Each site was installed with the Standard profile, default configurations of everything, with no core modules enabled or disabled out of the box. Devel Generate module was installed to generate 50 nodes to populate the homepage.

Each test was run 3 times, using Apache Bench, the highest average request per second result was kept out of the three runs. Drupal 7 and Backdrop were installed on the same VM, side-by-side in different directories. So regardless of how running benchmarks inside of a VM may affect results, at least both systems were on equal footing. One adjustment I made that differed from a typical Drupal VM install is that I switched file system mechanism to rsync, which has better performance and is important for Backdrop, which reads configuration files directly from disk.

For this test, the page cache was enabled in both Drupal 7 and Backdrop. 5 minute cache lifetime. The Backdrop background-fetch was enabled in Backdrop, though that shouldn't have an effect on speed because the cache will be fully primed before testing. Then I loaded the front page 750 times with 10 concurrent connections.

Backdrop shows a clear advantage on anonymous page caching, between 20% and 30% faster! This is largely due to two factors:

Both Drupal 7 and Backdrop may be configured to avoid any database queries at all, which would yield improvements for both systems. But in such cases a reverse proxy would be the best solution, in which case the speed of the anonymous page cache hardly matters at all.

And as has become common knowledge, PHP 7 sweeps the older versions of PHP, more than 30% faster than the previous versions for both Drupal and Backdrop.

For this test, I disabled the page cache on both Drupal 7 and Backdrop and loaded the front page 750 times with 10 concurrent connections. 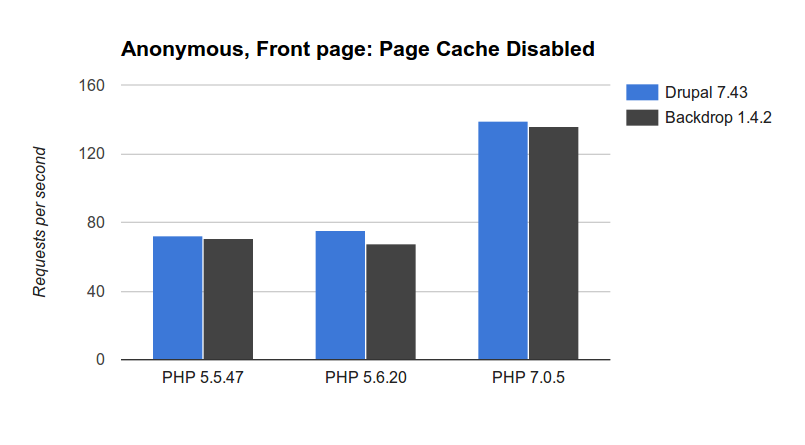 When loading the front page without the page cache, Backdrop falls just short of Drupal 7 performance, about 2% slower on PHP 5.5 and 7. For some reason it slipped on PHP 5.6, where it was 11% slower. While Backdrop and Drupal 7 share a very similar codebase, the collection of out-of-box modules varies signficantly. See the end of this post for a module comparison.

For this test, I started a session with UID #1, then retreived the cookie from the browser and used it in ab. 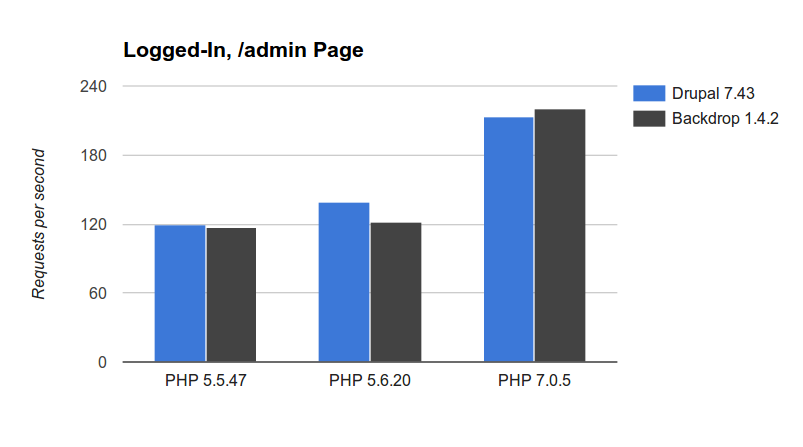 In this test, results mostly mirror the anonymous page cache situation. Drupal 7 is 2% faster on PHP 5.5 and the margin for Drupal is largest on PHP 5.6, where Drupal is 13% faster. Backdrop eeks out a small gain on PHP 7 where it is 2% faster.

So is Drupal 7 or Backdrop Faster?

From these tests it looks like Backdrop is signicantly faster for anonymous users when cached, but slightly slower on non-cached pages. It should be noted that both of these systems are comparing out-of-box functionality. Both Backdrop and Drupal 7 have differing modules available and enabled by default, here's a summary of the differences:

This difference in modules, especially Backdrop's Panels-port, Layout, have increased the amount of code executed on each page load. Through a balance of removing modules and a few abstractions, Backdrop manages to provide some major features while maintaining Drupal 7 level performance.

What about Backdrop versus Drupal 8?