Backdrop is intended to be a platform for developers and users of Drupal who might be thinking about adopting other platforms after evaluting Drupal 8. The goal of the Backdrop project is to provide shiny new features built on an iteration of the existing Drupal 7 APIs: before Symfony, PSR-0, and the "Drupal Kernel" were introduced.

Backdrop is a project built for the love of Drupal. For many developers, working on the Drupal project has led to lots of exciting new opportunities. People have earned new jobs, visited new cities, and made new friends though the Drupal community! Hundreds of hours have gone into developing websites for clients, but time has also been lovingly donated to create reusable code for the core or the contrib module repository. But even better, any people have been empowered by Drupal to promote their ideas through a system that anyone can install for free!

The traditional audience of Drupal is not a crowd of professional developers. We've gotten to that point through years of building flexible systems at low cost. However, "low cost" isn't exactly how most people would describe Drupal today. Even in the current version of Drupal, we've abstracted things beyond where a new developer could pick up Drupal in a day, grasp the basic concepts, and then start building a website.

Many of Drupal's leading developers didn't even know PHP when they first started making Drupal websites. But as is often the case, after some initial hacking, they were hooked! Backdrop aims to meet the needs of this community. It will provide a simple, intuitive API that's easy to understand at first glance.

Backdrop appeals to a different developer audience than Drupal 8. By rewinding APIs back a bit further (removing database query abstraction and page-level renderable arrays for example), Backdrop will lower its barrier to entry, increase performance, and position itself closer to the WordPress market.

The hypothetical growth chart below estimates the Drupal market today, and on into the future. It's not backed up by statistics or hard numbers, it only depicts the general history of Drupal's audience and predicts the future of the Drupal market, with and without Backdrop. 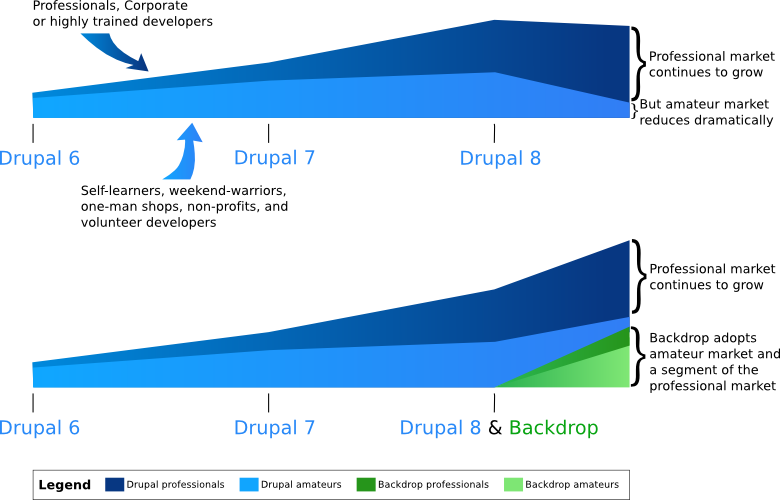 Backdrop aims to grow the overall market by sustaining those that might leave the Drupal community without it. Backdrop also aims to appeal to new adopters who may find Drupal 8 too complex, but feel limited by WordPress.

A Product for End-Users

Drupal 8 includes some great end-user features: a visual editor, revamped content creation, built-in Views module, and more. Backdrop also aims to provide all of these new and improved end-user features, but on a codebase that's simpler than that of Drupal 7.

Backdrop aims to deliver features to end-users more quickly with more frequent ("minor") releases. At the same time, APIs will move more slowly over longer ("major") release cycles. Backdrop will encourage both developers and end-users to upgrade through the features it delivers.

Backdrop will use semantic versioning (which is also under consideration for Drupal itself).

The amount of work can be kept to a minimum by organizing development branches cleverly with Git. Bugs in today's software can be fixed today, before being merged into the next version.

If you'd like to hear more information about Backdrop CMS, check out these great podcasts covering the topic:

If you don't have the code to contribute, you can help get Backdrop off the ground by providing seed funding for infrastructure, and branding. Donations are being gratefully accepted through PayPal.

Weekly progress meetings are being held on Goolge Hangouts. Agendas for each meeting will be posted ahead of time on Twitter, and the hangout URL will shared in our IRC channel: #backdrop on Freenode.

Miss a meeting? No problem! Videos of past meetings will be automatically posted on the BackdropCMS YouTube Channel.

Thanks for reading the Backdrop introduction. Please join in development and help us make Backdrop an amazing system that anyone can learn and use.

There's a lot more to discuss. For your concerns and input, please discuss in the Github issue tracker, or reach out to me personally at backdrop@quicksketch.org.

UPDATE 9/21: We've received a lot of feedback (on both sides, though mostly positive) since this was published. In the past 10 days alone:

This was the original backdrop announcement, and has been moved to the backdropcms.org blog for historical purposes.