If you wanted to create a new layout that could be used on specific pages of your site, you would: 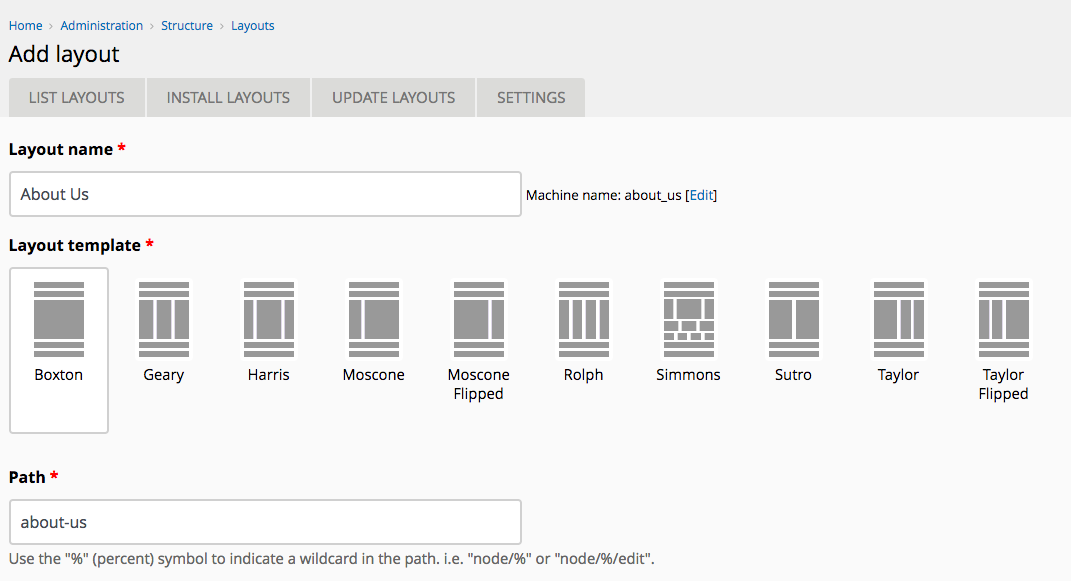 During creation or editing of a layout, visibility conditions can be added to determine access to the layout. If the user does not have access Backdrop will return a "Page not found" error.

Multiple layouts can be made on the same path. This may seem unintuitive but is reasonable - because of visibility conditions. Although multiple layouts are on the same path, one may apply if condition A is true while the other when condition A is false. For example, two layouts may be active for your path 'company-details', but one may only show when the site user is anonymous, while the other only shows for other registered  users. This makes it possible to show entirely different sets of blocks and content based on the user role.

If there are multiple layouts at one path, the first one which is not invisible to the user is shown. Layouts can be re-ordered though, to guarantee the order of selection. If no layouts meet the visibility conditions, Backdrop will return a "Page not found" error.

For example, our menu path 'company-details' has three layouts defined:

If an anonymous visitor attempts to visit http://my-site/company-details, he will only get the first layout, the Guest layout.

If an editor visits, he will only get the Editor layout

So if for example a visibility condition was set on the 'company-details' menu path so  that only users with site language set to French were allowed access, any English-language visitors, editors or executives visiting this path would get an "Access denied" error. However, French users accessing this path would then have access based on the individual layout-based visibility conditions as described in the previous section.

If an anonymous visitor attempts to visit http://my-site/company-details, he will get an “Access denied” error, since anonymous users don’t have a language set.

If an editor visits, he will only get the Editor layout

If an executive visits he will also get the Editor layout unless we switched the layouts as described above..

During creation or editing of a block, visibility conditions can be added to determine access to the block. If the user does not have access Backdrop will simply hide the block.

Context is Backdrop's way of letting a block declare to the Layout system if it requires a node or a user or other data source to extract data. If the context is not present Backdrop will then not even bother loading the block

Blocks without satisfied context will not appear in the block list, so a user can’t add them by mistake.

Backdrop has a great feature which allows individual fields from a node to be displayed as separate blocks. These blocks are then available in the Layout UI's "Add block" list as Field blocks. You could identify Field blocks in the block list by their naming format which is the word "Field:" followed by the field name and then the field machine name in brackets, such as "Field: Image (field_image)". But if you went into the Default layout you would find no Field Blocks listed in the block list. Why? Because Field blocks have declared that for them to work, the page must be the display page of a node or some other entity. Since the default layout can be used on any page, that page may not be an entity page, therefore Backdrop hides Field Blocks from the default layout's block list.

If you want to use Field blocks then, you need to create a layout which provides an entity to Field Blocks. Qualifying layouts would be ones where the "path" of the layout is of the format '<entity>/%' for example 'node/%' or 'user/%'. This tells Layouts that this layout must be ready to deliver an entity context to its blocks, where the entity type is the first part of the path (eg 'node') and the entity ID is the second part of the path.

So for a layout with the path 'node/%', visiting the "Add block" page would show those Field Blocks which have required the 'node' entity, such as "Field: Image (field_image)". If this block is placed in the layout sidebar and the layout saved, visiting a path such as 'node/55' would allow this image to be displayed (providing as well an image had actually been uploaded in the Image field, of course) in the sidebar as its own block.